June 17, 2016
Harvest is coming, harvest is coming. Some may call me chicken little, but harvest IS coming. Our almonds are starting to show early signs of hull split, which is the earliest sign of almond harvest. Nut size and nut set combined are what is referred to as yield.  In almonds these factors vary so much depending on where you are located in California. North, South, East, West, sandy soil, clay soil, state water, ground water, salty water, variety, rootstock the list goes on and on. These elements can change yield so much that almond estimates are truly that, an estimate. 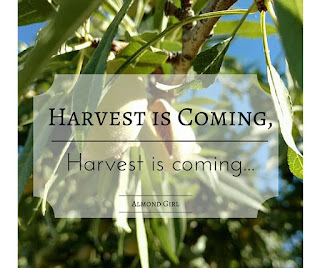 In general terms in the southern end of the Central Valley most of our nuts appear smaller than last year when comparing size of the nut. Size of the nut can be determined by water the tree has available to take into its system and create a crop. Size can also be determined by how stressed a tree may be due to water or weather conditions. Size can also be related to set, a larger set produces smaller nuts because the tree spreads its resources to more nuts. Nuts are created by pollination through bloom.

This year the bloom was rather fast and furious. Back in February, our flowers bloomed very fast and before we knew it they were done. A tree has a large number of flowers that are pollinated but only 10-15% will actually set an almond. Retention of pollinated almonds was good this year, making a fairly decent set. There appears to be somewhat better set than last year, meaning more nuts. How that related to yield we will wait and see.

In our micro climate we didn't have severe hail storms as other areas of California did. Some areas had a worse drop rate than we did. Our biggest problem was wind knocking down trees rather than a large percentage of the crop. So instead of loosing developing nuts we lost whole trees.

As the nuts get closer to harvest they start to split. We have already had corner trees on the edge of the orchards that have started to split. In the next week, we will be seeing more and more of these nuts start to split. Blanks will split first as they are weaker hulls and have no nut inside of them. In the next week, we will see more splitting of viable nuts. As more nuts start to split, we will have to spray an insecticide, about the end of next week, to product the nuts from naval orange worm making a home inside the nut.  After hull split spray it will be about four weeks until harvest. We are projected to start harvest last week of July and then harvest is here!