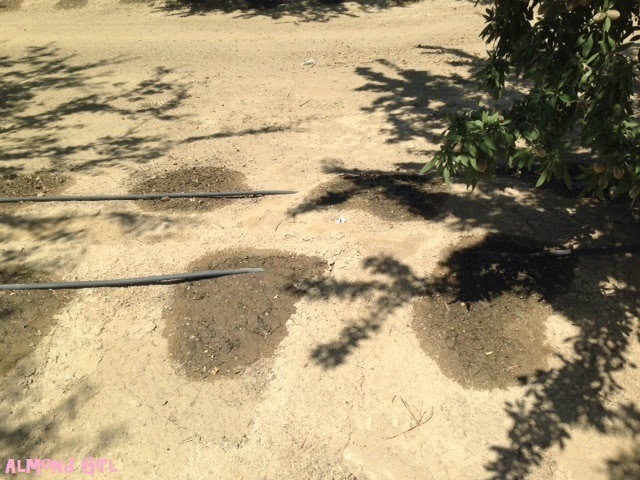 In our orchards we have multiple varieties of almonds. These varieties mature and harvest at different times throughout the harvest season. We start with nonpareils, the most popular, most produced and most widely used variety. But a field of nonpareils most often has one or two other varieties that aren't ready to harvest for a couple weeks to a month later. When we flood irrigated, we weren't able to irrigate any of the orchard until the harvest was complete on the entire orchard.  If we chose to flood irrigate, the orchard rows would be too wet and the machinery would get stuck. The weeds would also start to grow in the middle of the rows, making it difficult for the machinery to pick up the almonds.

Now that we drip irrigate our fields, we are able to harvest and irrigate at the same time. The drip hose is delivering water directly to the base of the tree roots, with only a small portion of the water staying on the surface of the ground. We are able to shake or sweep one row of almonds while the row next to it is being irrigated. This helps the trees from being stressed during harvest. Stressed trees don't mature as timely as happy trees, prolonging harvest. Stressed trees can also lower our production for next year, too. So by drip irrigating and harvesting simultaneously, we are not only benefiting our trees this year but for years to come!