May 08, 2017
Milk. Most of us drink it or use it as an ingredient on a regular basis. Whether it is pouring milk onto your cereal, topping off your coffee with creamer, digging into a big bowl of ice cream or just enjoying a tall glass of milk. Milk is a daily part of most people's diet.
Some people however, can't enjoy milk in the traditional form. Many are lactose intolerant or have a form of milk allergy causing them to search for milk substitutes.
Lucky for them, there are many on the market now a days. Almond milk, cashew milk, rice milk, soy milk, coconut milk or whatever you can imagine is now available for those who choose. And these aren't just available in milk form; but cheese, yogurt, butter, ice cream are all available in some kind of dairy milk substitute. But lately, this term 'milk' has been under attack. 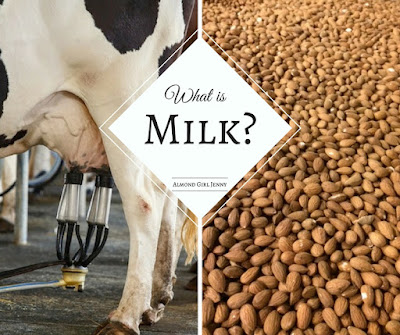 Merriam-Webster defines milk as a 1) fluid secreted by the mammary glands of females for the nourishment of their young as well as 2) a food product produced from seeds or fruit that resembles and is used similarly to cow's milk. BOTH are acceptable in our dictionary.
The FDA however, describes milk as the lacteal secretion, practically free from colostrum, obtained by the complete milking of one or more healthy cows.
COWS...did you catch that? The FDA specifies cows. So, not only are they are saying seed or fruit milk isn't milk but are they are also saying goat or sheep milk isn't milk either?

Why does it matter?

Well, it matters to a number of dairy industry folks who are trying to make the FDA enforce their labeling requirements of milk. But why now? The FDA hasn't been enforcing this labeling law and thousands others, so why do they care now?


While 91% of Americans consume dairy milk, only 57% of consumers drink dairy milk by itself.
“In addition to half of Americans consuming non-dairy milk, research reveals that nearly all non-dairy milk drinkers also drink dairy milk, revealing that consumers are turning to non-dairy out of preference as opposed to necessity,” People like the taste of substitutes and they prefer it. Yet, they are still consuming dairy milk.
Personally, I buy cow milk. I used to buy almond milk for myself but once I had small children drinking milk, I switched back to cow milk. I didn't want the extra sweeteners and rich taste of almond milk for such young kids.


The problem that some see is that the USDA reported in 2011 that US milk sales were half of their 1980 levels. Some research reveals the global market for milk substitutes reached $5.8 billion in 2014 and is expected to reach $10.9 billion by 2019. But, really let's compare that number versus cow milk. Dairy milk global value is still $336 billion U.S. dollars in 2014 and was projected to grow by 6 percent until 2019.


Are we really worried about a less than 2% market of milk substitutes. Honestly, I think the dairy folks have bigger fish to fry and other problems they should be tackling. In a world where we should be promoting and protecting agriculture as a whole, I don't like the idea of one sector of the industry attacking another. Milk is milk. Whether it comes from a cow, sheep, goat, almond, cashew, rice, whatever it is, people are going to call it what they call it.