The time I met the Peterson Farm Bros

March 29, 2017
From Kansas farm boys to overnight internet sensations, I would say the Peterson Farm Brothers are leading agriculture advocates. When I found out that our California Young Farmers and Ranchers Conference was going to host these three famous Kansas boys, I was pretty excited to say the least. They literally are reaching the world with their agriculture advocacy work and getting people all over to talk about farming, and they didn't even mean to. 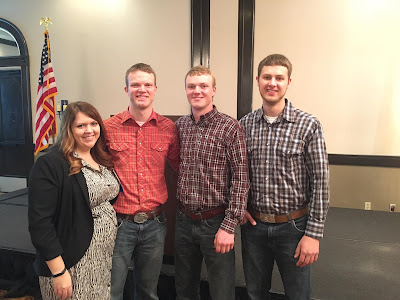 It all started on their Kansas family farm in May of 2012 when the oldest brother, Greg, had an idea for a farming parody song of the popular "I am sexy and I know it". Over the course of the next month, the boys would film their video "I am farming and I grow it" and at the end of the June they posted it on their personnel social media pages and sent it to family and friends.


They had hoped that maybe someday that video would get 50,000 views. Someday. But they honestly just wanted to make a fun video for family and friends. Well within two weeks, that video had been viewed on YouTube 5 million times!  Yep, 5 million times in 2 weeks! They had appeared on national news and people all over the world were talking about the Peterson Farm Brothers.
Now from farming, speaking at conferences, blogging, advocating and making videos these boys have their hands full. One still in college and the two oldest back on the farm, it isn't your usual farm family lifestyle. But they are so down to the earth and level headed individuals.


They were an inspiration to me. Not that I am going to start making music videos about almonds anytime soon, but their advocacy and outreach is an inspiration. They are just normal farm boys, similar to ones all around me. But they take advocacy and outreach to the next level. They draw people in with their witty and entertaining videos but then they keep you captivated by teaching you a little something about cows, pesticides and farming issues.


I felt blessed to have the opportunity to sit across the table from them at breakfast and listen to their story. They are still so level headed and honest people. They may have crazy speaking engagement schedules and film music videos on their farm, but they are just three Kansas boys from a farming family who want to highlight the positives of what farmers and ranchers do everyday.