Saying Goodbye to our Buddy 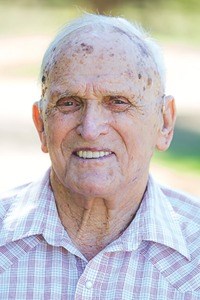 This was one of the hardest posts to write. I needed a full box of Kleenex by my side, but I made it through it. On November 14, our family lost a great man. Our patriarch, grandfather, great grandfather, farmer, neighbor, businessman, and all around great man passed away at the age of 94. Buddy, as he was referred to in our family, lived a fruitful and abundant life. He was always up to try new things, which was apparent by the 25 plus crops he had farmed over his life. He was a loving soul who cared for his family and friends with the biggest heart. Buddy was a great man, that we will miss.

Buddy was born at the old homestead house on the highway, that his father built when he settled in California in the early 1900's. Buddy was the youngest of six brothers. His poor mother wanted a girl so badly that she would dress him up in girl clothes and grew his hair long. But that didn't last long since Buddy wanted to always be farming and working the land with his father. He learned how to make wine at the age of 6 and yes that was during prohibition. He rented his first farmland while he was still in high school and couldn't wait to get home from the war to continue to farm. Farming was always his passion, but he knew he had to serve his country when World War 2 broke out. He saw things in Germany during the war that we can only pray we never have to see. He defended his country with pride and courage. He returned home to farm with his wife and soon added three children to the family. 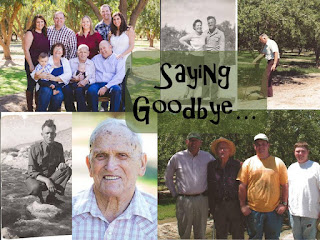 Destined to be a gambler, being born on 10-11-21, 21 was of course his favorite card game, and farming just seemed to fit him. Of course there was bad years with cotton, melons and beans to name such a few. One year it made more money to let the sheep come eat his bell peppers then to harvest the field. But in the 1970s when he invested in almond trees, he knew it was the right decision. He was always willing to try something new and with farming he did just that. We can thank Buddy for the 4 fields of almonds in a row all with different varieties and combinations. He was ahead of his time, trying to figure out what worked and what didn't.

His son continues to run the farm today along with my almond farmer husband, it was 3 generations involved in the day to day dealings. Now it will be up to my little almond farmer son to continue the legacy that his Buddy created.

But I consider myself lucky to have entered into a family that has been carved and molded by such a great man. He built a farming legacy and tradition for the family to continue. It will be with great pride that we continue on his farm and raise the next generation in his footsteps.